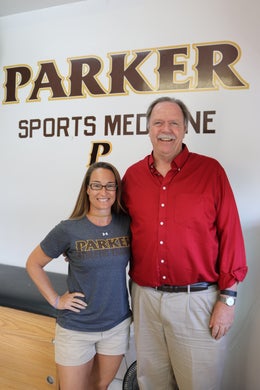 It was a Friday in September at Francis Parker School and the football game was in full swing. Athletic trainer Niki Dehner heard her name being yelled from the stands and she turned to realize some of the fans were trying to get her attention near the top of the bleachers – a spectator had collapsed suddenly. Upon reaching the collapsed spectator Niki found two physicians (spectators) performing CPR on the collapsed gentleman. She ensured 9-1-1 had been called and retrieved the automated external defibrillator (AED) from the sidelines. Niki applied the AED and administered a shock, at which time the emergency medical technicians arrived and transported the gentleman to the hospital for further treatment.

Niki is happy to report the spectator, a teacher at Francis Parker School, was ultimately revived and survived sudden cardiac arrest (SCA). After missing a few weeks, he has returned to work at the high school.

For Niki, she is proud of all those who played a role in helping save this man’s life. The emergency action plan (EAP) was executed as designed and an AED was readily available when it was needed. All those involved responded effectively. Of note, the students working with Niki acted quickly and confidently to locate the AED as instructed and direct the ambulance to the stands. Having the AED available on the field and not inside the building was critical in getting to the collapsed spectator quickly, as time is of the essence when SCA is suspected. For every one minute delay in defibrillation, the survival rate of a cardiac arrest victim decreases by 7 to 10%.